don't judge a banana by its colour

one black mummified banana languished in the fruit bowl for a while until it became an embarrassment..i secreted it in the vegetable crisper so my daughter (who's now living with me) and sunday's birthday guests (especially those to whom i'm related) wouldn't see it and so i could spare myself the strange looks..you see..i just knew that banana was destined for stardom! 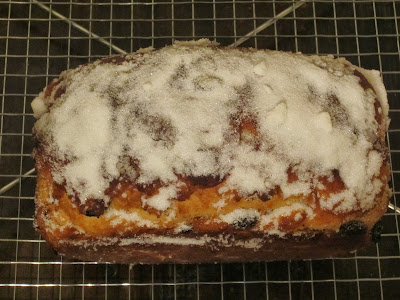 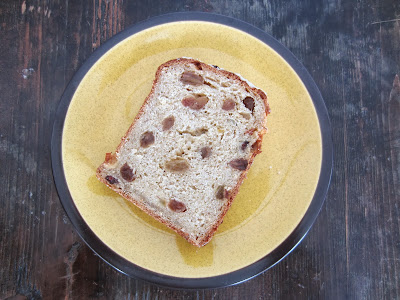 ~ in the bowl of a stand mixer add flours, banana, milk, cream, coconut butter, peel, honey, yeast, and starter and mix adding filtered water if necessary to achieve a shaggy dough
~ leave to autolyse for 20-30 minutes
~ add salt, mix briefly, rest for 10 minutes then mix briefly again
~ remove bowl from stand mixer, cover with a damp tea towel and leave until doubled
~ remove dough to a flour dusted bench and gently knead in the sultanas
~ place the dough in a bread tin and leave, covered, to prove
~ brush the top of the loaf with the extra milk
~bake at 220 deg c for 20 minutes, cover with brown paper or foil, reduce oven temperature to 200 deg c and continue to bake for another 20 minutes or until cooked
~ spray the top of the loaf with water and sprinkle generously with castor sugar and return to the oven for 3-4 minutes (optional)

note: * these are all foods i used to avoid food waste
low fat milk: my daughter makes coffee every morning and once she's boiled the milk for the coffee a couple of times she used to discard it but i now get her to keep it for me to use in bread making
cream: i served cream with a cake i made for my son's birthday and there was some left over that i'm slowly using up
candied lemon peel: my neighbour recently gave me most of her beautiful lemon crop and i retained the rinds after juicing and candied them..

caveat: so much of my cooking is informed by what i'm growing and what i have in the kitchen..sure.. sometimes i need to shop for a particular ingredient to make a meal that i've planned but it's more the exception than the rule..this means that i rarely replicate dishes exactly..and i certainly don't expect anyone to replicate the recipes i post..it's just fun to share my passion..having said that though it's one of the best banana breads, yeasted or otherwise, that i've ever made..x 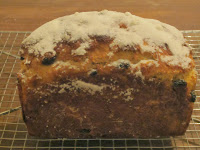 edit note: for those not trying to use up ingredients like i was use full cream milk and omit the cream