i bought some apples a couple of weeks ago..i got excited thinking they might be new seasons granny smiths because for me new season's apples and pears herald autumn..the gentle season..the season of muted colours and even temper and clarity in the air.. but even as i bought them they didn't look quite right but i went ahead anyway getting ahead of myself and the seasons..

they sat lingering for ages until i cut one up to see if they were salvageable..inside they were streaked brown through out and looked momentarily as if destined for the compost bin..but me being me just couldn't do that so i cut them up and threw them into a pot with a bit of water and cooked them, mashing them occasionally, until they were soft..i had no idea what i was going to do with them at this stage but i was considering apple jelly..after straining the pulp for 24 hours i had a lovely not brown at all liquid that tasted delicious..

my apple juice thoughts danced here and there but the one thought that stopped me in my tracks was the idea of putting the apple juice in a loaf of bread..that thought was added to another and another..i had more blackberries from another foraging session with one of my daughters and i now had proper new seasons granny's..my thoughts settled and blackberry and apple bread was made.. 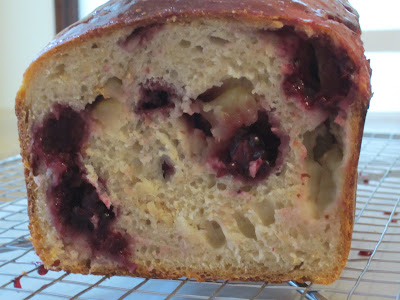 ~ mix flour and yeast with enough apple juice to obtain a soft shaggy dough and leave for 10 minutes
~ add salt, mix briefly, rest for 10 minutes
~ mix briefly once more, remove bowl from mixer, cover with greased cling film, and leave until the dough has doubled
~ remove the dough from the bowl onto a lightly floured surface and do one stretch and fold then rest for 15 minutes
~ repeat the stretch and fold cycle twice more
~ dice small the peeled and cored apples and cook with the sugar until just softening
~ mix the bread crumbs, almond meal and lemon
~ roll the dough into an oblong, sprinkle with bread crumb mix, and dot with blackberries and apple
~ roll the dough up sealing the end with a little water
~ place in a greased bread baking tin and leave until doubled or until a finger pressed into the dough leaves an impression
~ bake at 220 deg c (bread baking function) with steam for 25 minutes
~ reduce heat to 180 deg c and continue to bake for a further 20 minutes covering with foil if browning too much
~ mix the glaze ingredients well until the gelatine is dissolved using a bain marie if necessary
~ glaze the loaf as soon as removed from the tin

~ i purposely didn't add any sugar to the dough or the bread crumb mix because i didn't want a sweet loaf
~ i cut the loaf way too soon so it looks a bit doughy in the photo
~ for me the flavours worked well..not too sweet with a lovely apple and blackberry flavour that wasn't eclipsed by the subtle but welcome hint of lemon 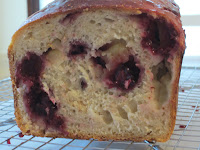 it doesn't feel like autumn here in melbourne with temperatures over 30 deg c for another week but it's not going to stop me celebrating its imminent arrival..