my family and i have developed a tradition over the years at easter of getting together on easter sunday for an informal afternoon tea..anyone who wants to join us is welcome..the more the merrier is my motto..

i can't remember when i last bought a hot cross bun because i started making them for easter years ago
but now that my children are older they come over in the morning and as part of our easter tradition we make them together..this year i decided that i'd like to include a greek element to our easter fare so i had a practice run at making tsoureki yesterday..as i said in an earlier post i've been wanting to experiment with greek recipes and ingredients and tsoureki encompasses both elements..i've wanted to make tsoureki for a long time and i never have and it often contains mastiha and mahlepi which are the very ingredients i've developed an interest in experimenting with.. 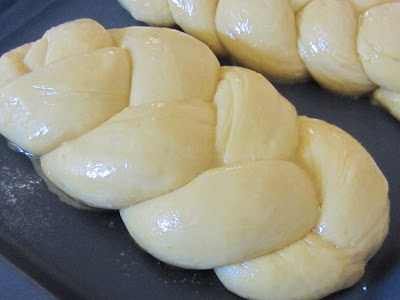 tsoureki
recipe adapted from 'flavours of greece' by rosemary barron

~dissolve 1 tsp of the brown sugar in the water and sprinkle over the yeast
~leave for about 10 minutes or until foam develops
~sift the strong flour into the bowl of a stand mixer and add the yeast mix and the milk
~mix on a low speed adding enough plain flour to make a soft elastic dough
~rest for 10 minutes and mix for 2 minutes
~repeat the cycle once more
~remove the bowl form the mixer and cover the bowl with cling film and leave until doubled
~while the dough is proving dry the orange zest briefly in the oven
~once dried grind the zest together with the mastiha granules with a tsp of the brown sugar
~brush a large baking tray with a little of the melted butter
~when the the dough is almost proved in another bowl beat the eggs until light and fluffy
~then add the remaining brown sugar, orange juice, vanilla, zest/mastiha mix and salt
~return the dough to the stand mixer and on a low speed add the egg mix, melted butter and remaining oil along with enough plain flour to make a soft dough..
~divide the dough into 6 portions and role each into a 20 cm rope making the ends thinner
~lay 3 ropes side by side and loosely braid tucking the thinner ends underneath so the loaf ends are rounded
~repeat with the remaining 3 ropes
~place the braided loaves well apart on the baking tray, loosely cover with cling film and leave in a warm draught free place for 2 hours or until doubled
~heat oven to 200 deg c
~for the glaze whisk egg yolk, honey and milk and brush the loaves with this mixture
~bake for 10 mins, reduce temperature to 180 deg c and cook for a further 20 minutes or until brown******
~transfer to racks to cool

happy monday one and all..x


this post submitted to yeastspotting
Posted by tea with hazel at 21:49