i've thought about peirnili on and off since i first ate them in thessaloniki when i was 24..up until then i hadn't seen them before and even though i've been back to greece several times since i haven't come across them again..my husband and i were introduced to them by an army colleague of my husband's and his wife who were from thessaloniki..on one of the few weekends when my husband and his colleague had weekend leave at the same time we caught the train from edessa where they were based to thessaloniki where we stayed for two nights..on the first night our friends arranged for us to go to a restaurant where they served the peirnili..i recall being quite excited by the time we got to the restaurant because they had described them to us in mouth watering detail..

it's taken me a long time to get around to having a go at making them because i have an endless list of recipes i want to try for the first time or recreate..when i looked for a recipe i found none in my greek cook books and very few on the internet and those that i did find all had similar fillings..i have a hazy recollection of eating different versions of them on that memorable night..i think one had a spicy minced meat filling..but after so long maybe my memory is playing tricks on me..regardless..that minced meat filling is calling me and i'm listening.. 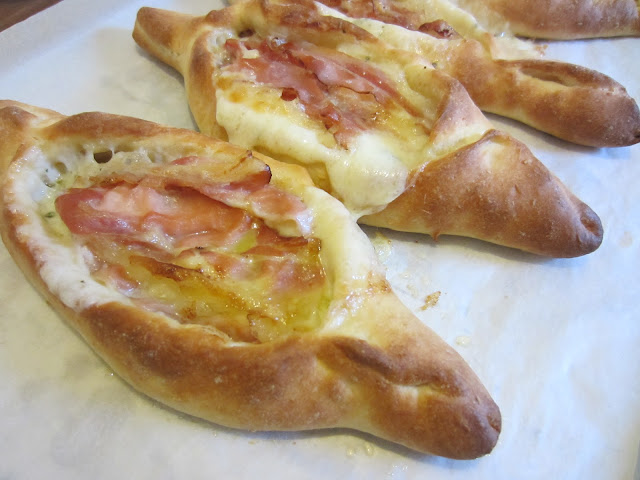 ~ mix the two flours with the yeast in a bowl of a stand mixer and rub in the butter
~ add the egg, honey and enough milk to form a soft dough
~ rest for 10 minutes
~ add salt and knead briefly
~ rest for 10 minutes
~ knead again briefly and then remove the bowl from the mixer
~ cover the dough with oiled cling film and leave to prove until doubled
~ remove the dough from the bowl and knead without flour or oil until the dough is pliable and no longer sticky
~ divide into 8 pieces and rest for 10 minutes
~ roll each piece of dough into an oval
~ sprinkle the centres with oregano and then add the kasseri and top with bacon
~ with the dough horizontal take the top right corner and the bottom left corner and press the dough to the centre
~ then bring the remaining corners to the centre and pinch the dough to create a boat shape
~ dot each 'boat' with three pea sized pieces of butter
~ place on a baking paper lined baking tray and rest for 15-20 minutes
~ bake at 220 deg c (bread baking function) for 20 minutes or until the cheese is melting and the dough is cooked
~ serve warm

comment: i didn't have high expectations of my first attempt at making peirnili but i was pleasantly surprised how well they turned out and how good they tasted..i'm now imagining other fillings.. 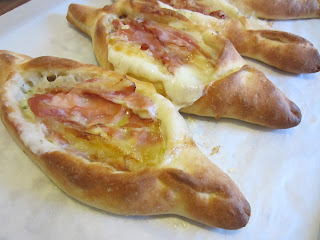 post publication note: i've just realised that peirnili are very similar to (if not the same) as turkish pide although i've never seen them look quite like peirnili here in melbourne and i've been to several turkish bakeries along sydney road (a hub of turkish cuisine)..funny how understandings happen sometimes..